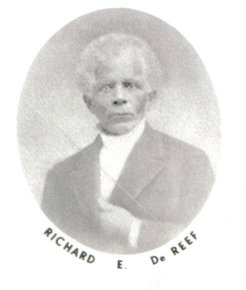 Richard Edward DeReef was one of the richest black men in Charleston. He had a Wharf at the end of Chapel Street, was in the “woodage business” (wood factor), and owned rental properties, most of which were located on the East side of Charleston. Because of his dark complexion he would have never been accepted into Charleston’s elite mulatto society, but he had money. Unlike other free black men, DeReef didn’t have to pay the Free Black Man’s Tax. His grandmother was an American Indian, so he claimed, Indian descent.