This is a picture of Edward Samuel Jones the second child of Jehu Jones Sr. In 1816 Jehu Jones purchased a mansion, located behind St. Michael’s church, and opened a lavish hotel there. The hotel catered only to whites. His second child, 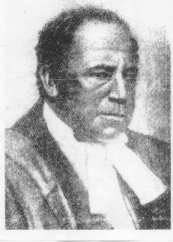 Edward, graduated from Amherst College in 1826 and later went on to Sierra Leone, where he was one of the founders of Fourah Bay College. Edward Jones was the first black man in the South, and from a Southern slave state, to have graduated from college. America’s first black college graduate was Alexander Lucius Twilight. He graduated from Middlebury College in Vermont, in 1822. Twilight was often mistaken for a white man.  Jehu Jr. studied ministry under the Lutheran Ministers in Charleston. He later went on to Philadelphia where he founded the first black Lutheran church in America, St Paul’s Evangelical Lutheran Church which is now a part of the campus at the University of Pennsylvania. The building is now the Wigs & Mask Club.