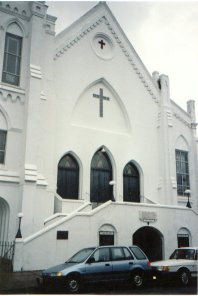 Emanuel African Methodist Episcopal Church is the oldest A.M.E. Church in the South. The first building was located near Amherst and Reid Streets but was burned in 1832 after whites found out that Denmark Vesey was a member of that congregation. They continued meeting in secret until 1865 when they built another wooden structure here on Calhoun Street, designed by Robert Vesey, the son of Denmark Vesey.  It was destroyed in the 1886 earthquake and the present structure was completed in 1892. Bethel A.M.E. Church in Philadelphia is the first and the oldest A.M.E. Church in the world.